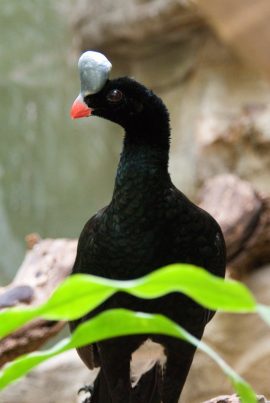 With the 2016 Olympics, Rio de Janeiro is getting a lot of attention, but the Houston Zoo has a Rio that deserves some attention of her own. Today, the bird department is celebrating the 28th Hatch Day of one of our Northern Helmeted Curassows! Affectionately called ‘Rio’, this bird came to Houston from the Rio Grande Zoo, which is now the Albuquerque Biological Park, in 1989. At 28, she is no longer producing chicks, but instead living out her retirement on exhibit in Birds of the World. Some of her favorite pastimes include eating watermelon, banana and peanuts, sunbathing, taking dust baths and being an ambassador for her species!

Northern Helmeted Curassow (Pauxi pauxi) are a South American species of bird located throughout portions of Colombia and Venezuela.  They primarily inhabit densely covered slopes of cloud forests and forage mainly on fallen fruits, seeds, and tender plant buds. This species is named for the large blue-grey casque, or ‘helmet’, located on their forehead. They stand about three feet tall and are usually characterized by white feathers on the legs and underside of the body with black feathers everywhere else.

Sadly, significant habitat destruction and fragmentation has led to drastic declines in the wild populations.  Hunting as a source of food, or for its decorative “helmet”, has also played a role in its decline throughout some portions of its range.  P. pauxi are currently listed as Endangered by the International Union for Conservation of Nature (IUCN) and are estimated to have fewer than 2500 breeding individuals left in the wild.  Little research has been conducted in regards to population distribution and density, so this species may be worse off than what is currently suspected.

The current North American population was established in 1968 and there has been a continued concentration in the Houston Zoo bird department since then. The population has grown to over 60 individuals since the first successful breeding in 1978.  Rio was one of the first P. pauxi hatched in the United States and she has played a crucial role in helping propagate this captive species that faces the threat of extinction in the wild.  With 13 direct offspring and 35 additional descendants, she is one of the most well represented individuals in the captive collection.  The typical life expectancy for this species in captivity is early to mid-20’s, which also makes Rio the oldest Northern Helmeted Curassow in the current North American population and the second oldest in recorded US history.