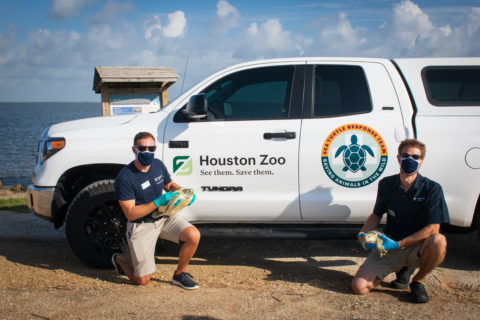 Two green sea turtles are now back to swimming in the bay! On Friday, July 31, the Houston Zoo and National Oceanic and Atmospheric Administration (NOAA) released the sea turtles in Christmas Bay after providing care for their injuries. 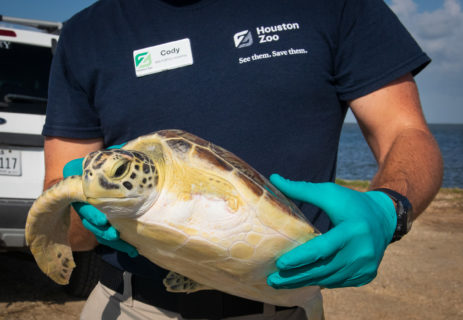 One sea turtle, named Star, was found stranded in Brazoria County in March 2020. The turtle was picked up by a Texas A&M turtle responder and transported to the Galveston Sea Turtle Hospital for examination. Star had pneumonia and was treated with antibiotics and an antifungal drug until given a clean bill of health.

The other sea turtle, named Twitch, was spotted by NOAA scientist Dr. Jennifer Leo and her family while they were sailing in Galveston Bay in May. Dr. Leo’s young daughter saw a fishing pole sticking out of the water, and as the family got closer, they saw the green sea turtle entangled in the fishing line attached to the pole. The turtle was missing most of its left front flipper, with fishing line constricting the left humerus. Due to the extent of the constriction injury, the remaining left front flipper had to be amputated by Houston Zoo veterinarians. Twitch also received antibiotics to treat the infection and fully recovered from his injuries. Dr. Leo and her family also attended Twitch’s release back into the bay. 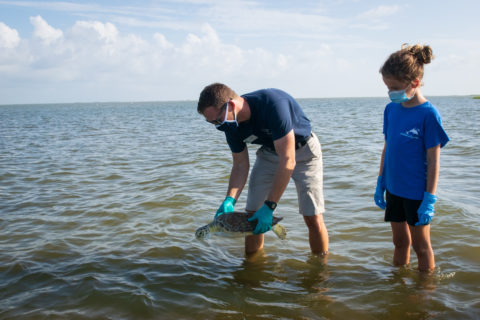 There are five species of sea turtles inhabiting the Gulf of Mexico, all of which are either threatened or endangered. They include the Kemp’s ridley, green, leatherback, Atlantic hawksbill, and loggerhead sea turtles.

Sea turtle populations are slowly recovering thanks to the collaborative effort of scientists, non-profits, universities, grass roots organizations and many dedicated people.