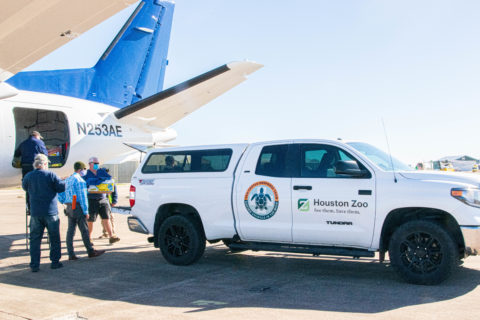 On Monday, Dec. 7, 120 sea turtles flew south to Texas after being found on Cape Cod, Massachusetts beaches suffering from hypothermia and other complications in recent weeks. They will continue to receive treatment and care from seven facilities in Texas, including the Houston Zoo, and be released into the Gulf of Mexico when they have recovered. 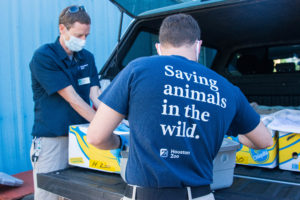 Sea turtles are cold-blooded and rely on heat from their environment to maintain their body temperatures. When water temperatures drop rapidly, they become lethargic and unable to swim due to the cold. Many of the turtles have pneumonia, and some have other medical conditions or injuries from being washed against rocks. They require expert care—but with so many turtles, the rehabilitation facilities are filling up in New England. And it’s only early December. The cold-stun season usually lasts until late December or early January.

“We’ve already transported more than 200 turtles out of the state, so we are running out of options for long-term care. The Texas rehabilitation facilities have generously offered their assistance, which is a huge help to us. This transport was one of the largest ever,” says Kate Sampson, NOAA Fisheries sea turtle stranding and disentanglement coordinator for the Greater Atlantic Region. It’s her job to coordinate the safe placement of each sea turtle. “For an endangered species like Kemp’s ridley, it is important to save as many individuals as possible to contribute to the recovery of the species. We’re so grateful to all of the dedicated and caring people who make this effort happen.” 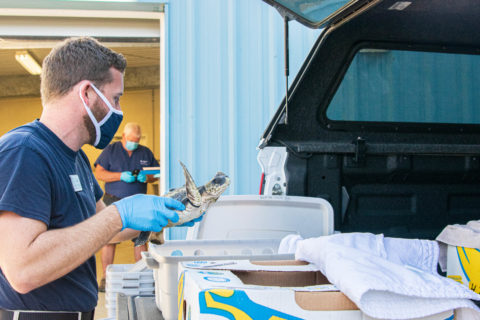 On Monday morning, staff from NOAA Fisheries and the New England Aquarium helped load the turtles, each tucked into banana boxes with towels, into the plane. For the flights, the turtles need to remain at temperatures of 70-75℉. Of the 120 turtles that made the journey, 118 are Kemp’s ridleys, one is a green sea turtle, and one appears to be a hybrid.

“We are thrilled that these critically endangered turtles were brought to Texas to receive care,” says Dr. Donna Shaver, Texas coordinator of the Sea Turtle Stranding and Salvage Network. “Kemp’s ridley nesting is limited to the beaches of the western Gulf of Mexico. Although most nests are laid on the beaches of Mexico, nesting also occurs in Texas, especially on the remote South Texas beaches of Padre Island National Seashore. Many of these young Kemp’s ridleys rescued from Massachusetts could eventually return here to nest. We documented one of these nesting at the National Seashore and on South Padre Island in 2009, after being found cold stunned in Massachusetts in 1999, rehabilitated, and released in 2003.”

Castle Aviation and Jetstream Aviation Capital joined forces to donate a SAAB 340B turboprop aircraft to move these turtles. 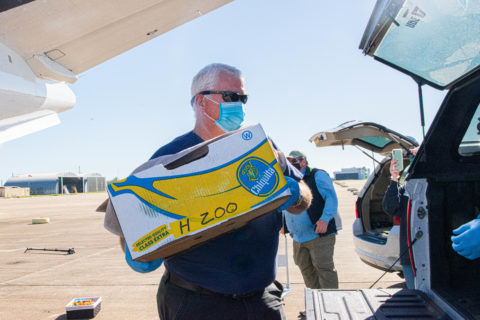 Pilots Michael Looby and William Gisler took off at 7:50 a.m. and landed in Galveston eight hours later. There, they unloaded 30 turtles, 10 to Texas A&M University at Galveston and 20 to the Houston Zoo Sea Turtle Hospital at NOAA’s Galveston Lab. Then, they flew to Port Isabel, where they unloaded 20 turtles headed to Sea Turtle Inc. After that, they stopped in Corpus Christi, where they unloaded 60 turtles, with 20 each going to The ARK, Texas SeaLife Center, and Texas State Aquarium. The final stop was Dallas, where Sea Life Grapevine picked up the remaining 10 turtles. The total transport time was 14 hours.

After arriving at the seven facilities, each turtle received a physical exam, and all are said to be doing well. The goal is to release these turtles back into the Gulf of Mexico as soon as they are healthy enough to return.

The Houston Zoo Sea Turtle Hospital keepers will be responsible for daily care of the 19 Kemp’s ridleys and the single hybrid turtle. The Zoo’s veterinary team will oversee their treatments. The Houston Zoo’s medical team will also assist the Texas A&M University at Galveston team with veterinary care. 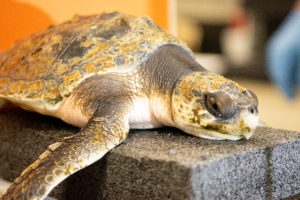 NOAA Fisheries and the U.S. Fish and Wildlife Service share responsibility for helping these endangered turtles recover. Kemp’s ridleys have been listed as endangered since 1970, and the population experienced a rapid and significant decline between the late 1940s and the mid-1980s.

This dramatic decline resulted from intensive egg collection, killing of nesting females, and bycatch and drowning in the shrimp fleets of the U.S. and Mexico. Due to intensive conservation actions, Kemp’s ridleys began to slowly rebound during the 1990s. However, an overall decline in nests was observed from 2009 through 2017, when total documented nests reached near 25,000. At this time, it is unclear if future nesting will steadily and continuously increase, similar to what occurred from 1990-2009. It’s also possible that nesting will continue to exhibit ups and downs as recorded in the past 5 years. The most recent 5-year status review conducted by NOAA Fisheries and the U.S. Fish and Wildlife Service concluded that Kemp’s ridley remain in danger of extinction.