Goeldi’s monkeys are small, predominantly black primates weighing around a pound. They live in the Amazon rainforest and are mostly arboreal, meaning they can be found up in the trees. 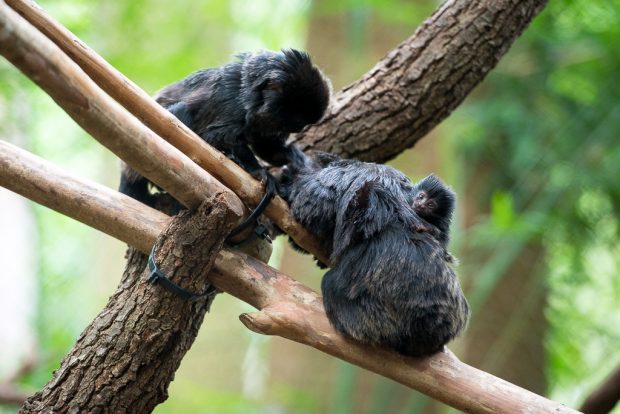 In the wild most of the Goeldi’s diet consists of fruit, fungus, and insects. They are also known to occasionally eat small reptiles and amphibians.

Goeldi’s live in groups of 2-12 individuals.  A female’s gestation is about 5 months long and she typically gives birth to a single offspring.  Twinning is very rare.  At birth a Goeldi’s baby weighs only 2 ounces.  The mother carries the infant on her back for about a month before allowing dad to take his turn carrying the baby.  After that, the entire group will help care for the baby. 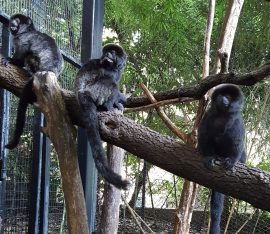 Peach and Andy were the zoo’s original breeding Goeldi’s pair.  They met here in Houston and really hit it off.  2.5 years later they welcomed their son, Opie, into the world.  Shortly after Opie’s arrival, Peach was pregnant again with her second son, A.J. (Andy Junior).  Sadly, Andy passed away before he had the chance to meet his second son.  Opie stepped up and took on the role of both father and brother.  He shared the responsibility of carrying around A.J. and teaching him how to be a proper Goeldi’s monkey.  He also fulfilled his brotherly duties of wrestling and playing chase around the exhibit.

The Goeldi’s family can be found in the Wortham World of Primates here at the Zoo.