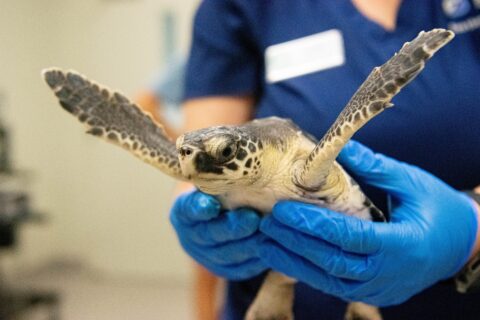 We kicked off World Sea Turtle Week with five sea turtles coming into the Zoo’s veterinary hospital from our partners at Texas A&M University at Galveston’s Gulf Center for Sea Turtle Research (TAMUG). Our veterinary staff evaluated each of the sea turtles and administered a treatment plan, if needed. Evaluations include a physical exam, bloodwork, and X-rays. Four of the five turtles returned to Galveston to recover with our partners at TAMUG while the loggerhead will rehabilitate with our sea turtle keepers at our hospital in Galveston. 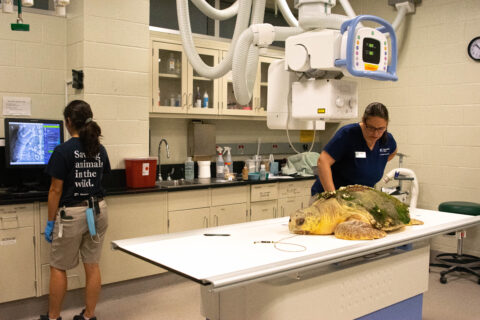 Kemp’s Ridley Sea Turtles
Three Kemp’s ridley turtles were brought for rechecks to receive physical exams, bloodwork, and X-rays. One of the Kemp’s had its shell damaged by a possible shark attack and also is dealing with a bone infection, which will be treated with antibiotics. Another Kemp’s was caught on a fishing hook over the weekend with a thinner body condition. The treatment plan includes antibiotics and feeding the turtle plenty of nutritious food. The smallest Kemp’s had a wound that looks like a tiny hole on the top of its head from a previous fishing hook and line injury. It’s currently rehabilitating with our partners in Galveston before being cleared for release back into the wild.

Loggerhead Sea Turtle
This turtle was found the night before it was brought in and found with a hook in its mouth after getting caught in discarded fishing line. After radiographs were done, it was found to have barbed circle hook in stomach. It is being treated with antibiotics and anti-inflammatory medication. It also received an increase in the amount of crab and shrimp in its diet to help see if the extra bits of shell help it to pass the hook naturally and without surgery. Good news, it was able to poop out the hook! It will continue to recover at our sea turtle hospital in Galveston and check back in with our veterinary team next week. 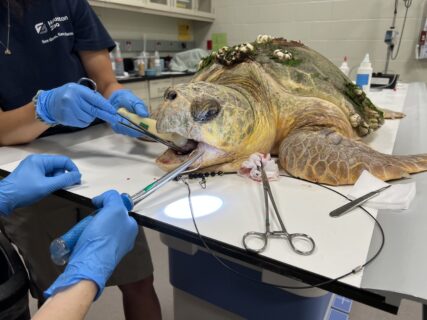 Green Sea Turtle
One green sea turtle was brought in after a foul hook (a hook somewhere other than in the mouth) was removed from its flipper. It’s been more lethargic since being caught. It will receive antibiotics and continue to rehabilitate before its recheck exam. 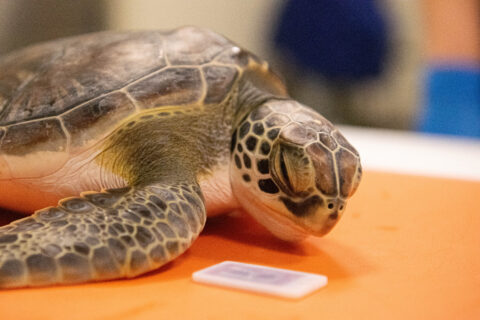 Every time you visit the Zoo, you’re helping save sea turtles in the wild. The Gulf of Mexico is home to five different species of sea turtles: Kemp’s ridley, green, leatherback, Atlantic hawksbill, and loggerhead. People are urged to call 1-866-TURTLE-5 if they find or accidentally catch a sea turtle so that an expert can assess the turtle and provide care if needed.

All of these species are either threatened or endangered, but thanks to the collaborative effort of federal protections, scientists, non-profits, universities, grass roots organizations and many dedicated individuals, sea turtle populations are slowly recovering. The Zoo’s veterinary team plays a huge role in saving wild sea turtles, treating, and providing care for up to 100 injured or sick sea turtles each year.