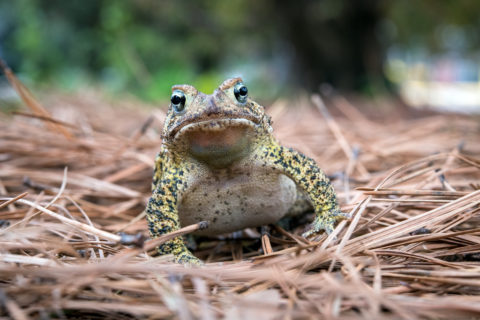 In 1970, a fellow Houstonian was added to the endangered species list, Anaxyrus houstonensis, the Houston Toad. This small toad was the first amphibian to be protected under the Endangered Species Act. Averaging about two and a half inches in length and weighing in around 40 grams, the small toads exhibit brownish-tan skin, peppered with specks of red, orange, and black; their small peeping eyes ever watchful for passing crickets or spiders. They can be difficult to spot even at the Houston Zoo! Tucked away in the Native Amphibian habitat in the Reptile House, the animals are often hidden in their burrows — preferring to come out at night.

Rapid urbanization, drought, and most recently — wildfires, have all pushed this species to the brink of extinction. Once found throughout southeast Texas, they are now found in just nine counties, most notably Bastrop county. The Houston toad has not actually been seen in Houston since 1975. Known as habitat specialists, the toads only live in very specific surroundings. Their favored habitat being piney loblolly forests with a healthy canopy and sandy-loamy soil. The males congregate around seasonal ponds in the spring to conduct large singing choruses, the idea behind this group singing being that the louder the group, the more females will arrive. Breeding takes place in these seasonal ponds due to decreased predation, without the presence of fish that would feed on the eggs and tadpoles. The females will lay a single egg strand of around 4,500 eggs. With enough females, these tadpoles and eventual “toadlets” will swarm the pond — overwhelming predators and making survival more likely for all of them.

The Houston Zoo was one of the first groups willing to step up for the Houston Toad and have championed their conservation for over 40 years. Partnering with local and federal government agencies, the Zoo participated in various research projects and population studies on wild Houston Toads. In the 1980s, the Zoo started the first Houston Toad breeding program. Over the next several decades, a Species Survival Plan® (SSP), was developed by the Association of Zoos and Aquariums. This plan, in conjunction with the Zoo’s growing assurance colony, would serve as a veritable genetic ark for the species; allowing for continued breeding of healthy toads to be reintroduced into their historic ranges. Thousands of head-started “toadlets” were released during these years. The Houston Zoo’s Houston Toad Recovery Program of today maintains the same mission it always has — to put ourselves out of business; to recover the wild population of Houston Toads to the point where our program is no longer needed. Every year since 2013, the Zoo has released hundreds of thousands of eggs, totaling about 5.5 million as of last year. This groundbreaking technique of releasing mass quantities of eggs now serves as the benchmark for success among wildlife restoration efforts.

In the months leading up to breeding season, every adult toad is given a thorough physical exam by our veterinary team, during which they also receive a vitamin supplement. The toads are also catalogued in a genetic database that tracks lineage, thus ensuring that we are matching up our breeding pairs in the healthiest, most effective way possible. Our breeding season for the toads is around 11 weeks long, with the final week being our holdback week — the toads who will be kept at the Zoo to grow and replenish our assurance colony. Each week our vet techs work with our keeper team to give hormone supplements to the toads. That week’s females receive several doses throughout the week and the male receives only one, just before being placed with the female. The toads then breed through a process known as amplexus in which the male piggybacks on the female, releasing his sperm as she releases her eggs. The eggs are counted and catalogued, then taken out to the wild release sites the following day. In our behind-the-scenes facility at the Houston Zoo, we maintain a population of around 600 individual toads — estimated to be the bulk of the remaining species. These animals are carefully maintained and bred under the stewardship of our team of specialist zookeepers, veterinarians, and scientists; working to bring this species back from near extinction.

As mentioned at the start, it can be easy to overlook the Houston Toad on your next trip to the Houston Zoo. Lions, elephants, and sea lions are all big and fuzzy, filled with exuberant charisma; but they say that it’s the small things in life that matter most, and you can’t get much smaller than the Houston Toad.