April 6, 2016, I received an email that would change the way I would spend my summers for the next three years. I had been accepted into the Zoo Crew program and the Houston Zoo as a Camp Mentor for Camp Zoofari, and was ecstatic. The days leading up to my first day, however, I grew more and more nervous. What if everyone there already knew each other? What if I had no one to sit with at lunch? The evening before my first day, I couldn’t sleep. I walked in the first day and walked into the room of the camp I would be working in for the whole week. There I met a few more experienced Zoo Crew members, and they were so kind! Throughout the morning they showed me the ropes and told me some funny camp stories, I started to feel pretty comfortable. Suddenly it was noon: lunchtime. Butterflies began to fill my stomach again as I walked into the lunchroom. To my delight, my new friends from camp were patiently awaiting my arrival. They introduced me to their friends, and I felt right at home. We played cards, talked about school, and obsessed over the Zoo’s baby animals. The kids in camp were amazing too. I could really see them grow into little conservation warriors over the span of just one week! By the end, I knew I would be back next summer. 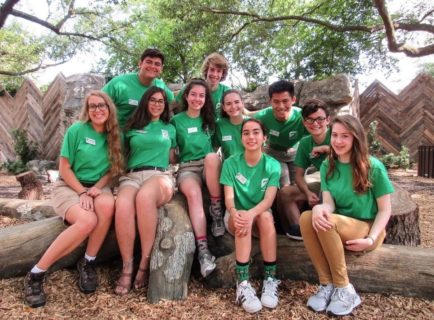 My second year, I dove into a new role. Teen Programs was under new management and becoming a Naturalist (the people around the Zoo with conservation activities on carts) was now an option. For just about five weeks I walked around the Zoo spreading the message of conservation to as many men, women, and children as I could. I loved it. Being a naturalist combined my love of conservation with my love of public speaking. This is where I learned about conservation issues that I had never thought about before: unsustainable palm oil, throwing out cell phones, unsustainable seafood, etc. I made new friends too. Like-minded and passionate teens just like me became some of my best friends. They encouraged me to think critically about solutions to issues and gave me helpful feedback to allow me to grow as a presenter. The thing I learned about Zoo Crew is that everyone there wants to see you succeed. The adult staff, the volunteers, and especially your fellow Zoo Crew all want to help you to find your place, and they will all put in their best effort to do it. By the end of my second summer, I had met lifelong friends and some incredible mentors. 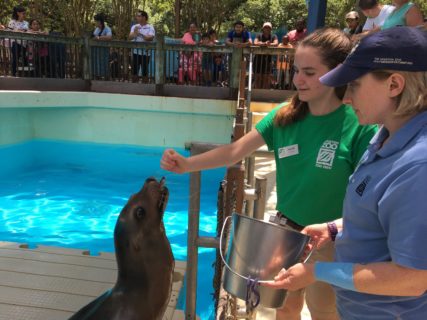 Throughout the year, I spent time at the Zoo in the Zoo Crew year-round program. I worked as a Camp Mentor during the Thanksgiving and Winter breaks, I participated in new naturalist station design sessions, and I got to spend time with my Zoo Crew friends. When Zoo Crew summer applications opened, I decided to try my luck at getting a position on the newly formed Teen Leadership Council. One application and an interview later, I became one of the four first Lead Naturalists. With this success under my belt, I decided to try my luck again by applying to be a Junior Zookeeper in the Sea Lion department. Another application and interview later, I received an email letting me know that I had gotten the position! Altogether, this was an eight-week commitment (not that I was complaining).  The first five weeks, I helped manage the naturalist stations, working with Zoo Crew to make their experiences better. My Co-Lead Naturalist and I gave presentations every morning, and we led daily recap meetings in the afternoons. We worked on creating new naturalist stations, revising old ones, and touching up worn ones. Through this, I learned about communication, leadership, and respect. 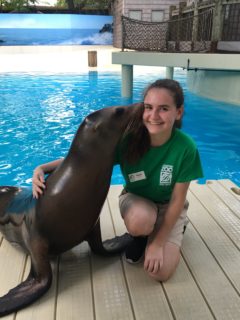 After those incredible five weeks, I immediately shifted gears and started up as a Junior Zookeeper for Sea Lions. Oh My Gosh. I had no idea I could learn so much in just three weeks. I wrote down everything I got to do throughout the weeks, so here it goes. I prepared fish diets, created enrichment, cleaned pools, observed training sessions, read through learning modules, made jell-o, made a birthday cake out of ice, learned about sea lion morphology, cleaned dishes, fed sea lions, got sea lion kisses, trained a sea lion, watched an intern give a presentation about capelin quality, learned how to use an oxygen tank, attended meetings, watched all five sea lions out together for the first time, made ice out of fish juice, pretended to be a vet, watched sea lions get weighed, got a sea lion painting, took the beaks out of squid, learned how to backwash, learned about water quality, learned about redirection stimulus, and so much more. With all of the things I learned about animal training, I wrote and delivered my own Keeper Chat discussing the mechanics behind asking behaviors of sea lions. This was, and is, something that I am proud of. The Keeper Chat was not just a representation of the work I did in the sea lion department, it was a composite of all of the things I had learned over the course of my three summers. (Check out my Keeper Chat in the video below!) Zoo Crew helped me to develop my public speaking skills, my confidence, and (most importantly) my passion.

To anyone considering joining Zoo Crew next year, I would like you to consider this. If you want to spend your summer on the couch, that’s fine. If you want to binge watch every movie ever made, that’s fine too. But, if you want to join a program that will promote your personal growth, introduce you to lifelong friends, and teach you about extremely important issues, then Zoo Crew is the right place for you, just like it is for me.