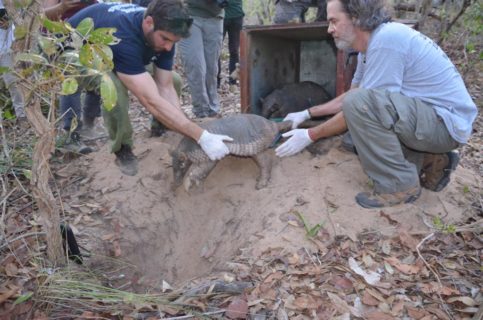 With a new Pantanal wildlife exhibit opening next year we are on a trip with KPRC Channel 2 to document the wildlife protection work the Zoo is doing with our conservation partners in Brazil.

While we all know and have seen jaguars and macaws, and most have heard of tapirs and caiman alligators, this week, we are focusing on a lesser known animal and its relatives. Giant armadillos belong to a Superorder of mammals that’s fun to say – Xenarthrans, which is an ancient (“prehistoric”) line of mammals including armadillos, anteaters, and sloths. 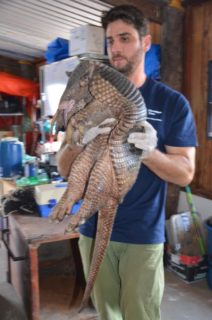 Giant armadillos are termite and ant specialists, as are the nine other species of armadillo in Brazil and three anteater species found here. They are not found in Zoos and are a very valuable species – not only due to their size – but because they act as an “ecosystem engineer,” they create spaces that provide food and safety for other wildlife.

In Brazil’s Pantanal, armadillos make deep burrows in the sandy soil (up to five feet deep) 2-3 times a week leaving their empty burrows behind. When the temperatures reach into the upper 90s, these deep sandy holes in the ground stay a cool ~75 degrees and are used as resting places and temporary shelters for over 70 species of wildlife from lizards and snakes, to ocelots, peccaries, and anteaters, to tamandua and puma. Many of these also rest in the soft sand mound in front of the burrow. So, this rarely seen, mysterious creature plays a crucial role in protecting the wild counterparts of many of the South American animals, like the ocelot, you can come and see at the Zoo. 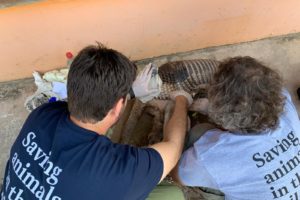 Every time to come to the Zoo a portion of your admission is providing support that is protecting wildlife like the giant anteater, giant armadillo and giant otter in Brazil.  The Houston Museum of Natural Science has a wonderful replica of the giant armadillo’s prehistoric relative, Glyptodont fossils (imagine an armadillo the size of a small car).