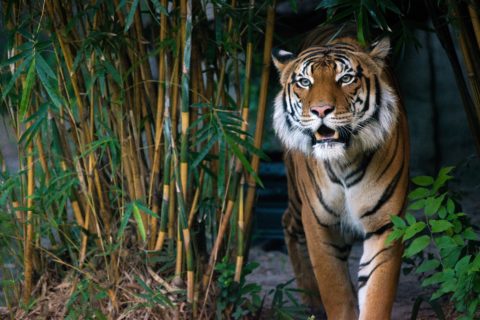 At the Houston Zoo we care about animals. We care about the animals living at our Zoo. We care about animals on the other side of the world, and animals in our neighborhood. A critically important expression of that care is ensuring all animals are provided the best welfare possible. And sometimes our federal government needs to step in to protect animals from poor and inappropriate living conditions.

Private ownership of tigers and other big cats as vanity pets or for commercial exploitation in poorly run facilities is a serious animal welfare problem. Unscientific and unethical breeding leads to an untraceable population of big cats that present animal welfare and conservation challenges, as well as potential danger to the public and first responders.

We believe that proposed federal legislation, the “Big Cat Public Safety Act” (H.R. 263/S. 1210), will help protect tigers and other big cats from poor living conditions. We join fish and wildlife agencies and other natural resource professionals charged with stewarding our nation’s wildlife in asking for your support for the Act. You can support this important bill by contacting your legislators. The Association of Zoos and Aquariums has made this easy for everyone. Simply fill out the form here, and a letter of support will be sent to your Congressional representatives.

The time to act is now. Just last month, a privately owned tiger was found wandering in a Houston neighborhood. Once the tiger’s owner regained control of the tiger, he absconded with the animal and was in hiding for nearly a week. The tiger is now safe in a sanctuary, but things could have gone very wrong. Tigers are dangerous animals and are never appropriate pets. They can weigh up to 600 pounds and can prey upon 1,000-pound animals in the wild. Tigers require specialized diet and professional care, which the Houston Zoo provides to our Malayan tiger, Berani, and all the animals in our facility.  The Houston Zoo strongly opposes the breeding and commercial trade in tigers for private ownership, based on concerns about animal welfare and public safety.

This widespread practice of big cat breeding and commercial exploitation in the U.S. is also problematic for the State Department and other agencies in their efforts to advocate for an end to the notorious tiger farming and trafficking activities in Asia, and to promote the conservation of big cat species in the wild. Because at present no single governmental agency tracks U.S. big cats, identifies their owners, or ensures the proper disposition of their valuable parts when they die, tigers and/or their parts are susceptible to an illegal trade that further stimulates demand, resulting in the poaching of wild tigers. This hinders the U.S. government’s ability to lead and advocate for international efforts to stem the trafficking of big cats and their parts and products.

The “Big Cat Public Safety Act” would strengthen existing law to prohibit the possession of tigers, lions, and other big cat species except by qualified entities, like the Houston Zoo. It also would place restrictions on public contact with these species and would curb the use of commercial photo-ops, petting, and similar potentially dangerous activities that often undermine animal care and welfare.

We urge you to ask your representatives to support the Big Cat Public Safety Act to bring us significantly closer to ending the animal welfare and human safety threats associated with the commercial exploitation of big cats.