The Houston Zoo is proud to announce a new partnership with the Rwanda Wildlife Conservation Association to save the endangered grey crowned crane.

While working as a field veterinarian with another Houston Zoo conservation partner, the Gorilla Doctors, Olivier Nsengimana was motivated by his childhood experiences of seeing the cranes dance and hearing their calls, to branch off of the Gorilla Doctors to start this project. 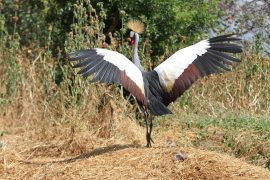 He created a multipart project aimed at addressing all sides of the threats facing grey crowned cranes. “As soon as I was out in the field, working with these animals, I thought, wow, this is me, conservation is what I was meant to do with my life.”

The grey crowned crane is the only species of crane in Rwanda. Its population has fallen by up to 79% over the past 45 years due to illegal poaching and trade. A symbol of wealth and longevity, the grey crowned crane is often kept as pets by hotels and wealthy families who are unaware of the harmful impact this has on the individual crane and the species.

Each step of the project aims at building on the previous step to help save grey crowned cranes in the wild as well as help the local communities around the cranes.

Step 1: A national media campaign. This step is focused on raising awareness about the cranes and the threats they face. 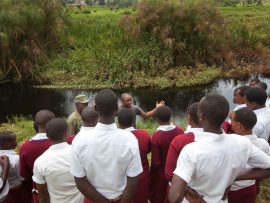 Step 2: Creating a national database of all captive cranes. The database includes information on the cranes as well as the owners. The creation of the database included fitting the cranes with a uniquely numbered leg band. By knowing how many cranes are in captivity and where they are located, the project is able to identify any new cranes in captivity.
Step 3: Community engagement and education. This step is a crucial component for the reintroduction of the cranes to be sustainable in the long term. In order to deter people from poaching cranes, an alternative source of income has to be found, this involves educating the local community.  Nsengimana wants to inspire other young conservationists in Rwanda, the same way the Gorilla Doctors inspired him. This is accomplished through visits to local schools as well as through the creation of an educational comic book.

Step 4: The rehabilitation and reintroduction of captive cranes to the wild. The reintroduction of the grey crowned cranes is the main goal of the project, but can only be accomplished in conjunction with the other steps. Captive cranes with a high potential of thriving in the wild are moved to a quarantine facility for health checks, then to a rehabilitation facility in Akagera National Park. When the cranes feel ready, they can fly out of the rehabilitation facility and into the wild. 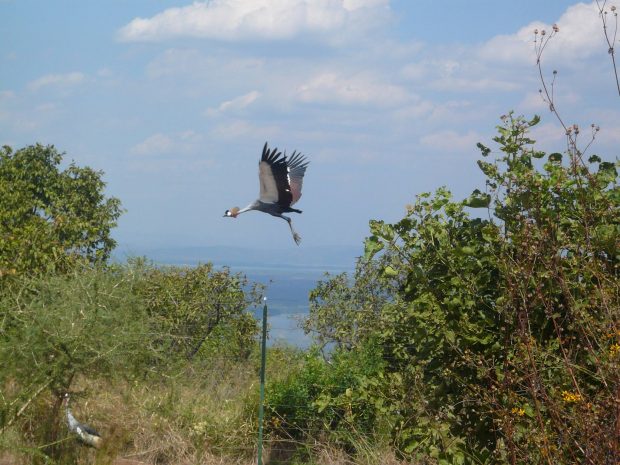 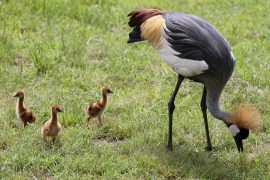 How can you help save Grey Crowned Cranes?

All photos by the Rwanda Wildlife Conservation Association.