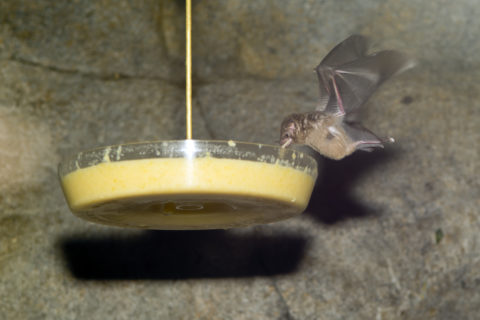 October usually welcomes cooler temperatures, pumpkin spice lattes, and Halloween. While we welcome these classic fall favorites, we can also recognize October as Bat Appreciation Month. Bats are often represented in Halloween decorations to incite fear; however, these little creatures are quite harmless and extremely helpful for the environment.

Representing one of the most diverse groups of mammals, bats are members of the order Chiroptera meaning “hand-wing.” There are more than 1,300 species of bats around the world, and they can be found on every continent except Antarctica due to the freezing temperatures there. Bats enjoy a variety of foods, consuming anything from fruit, nectar, fish, insects, frogs, and mice. As the only mammal capable of sustaining flight, they are incredibly intelligent and social animals. Bats do everything other mammals do, just upside-down!

Here at the Houston Zoo, there are two species of bats: Pallas’ long-tongued bats and Seba’s short-tailed bats. The Pallas’ bats are nectar-eating bats, while the Seba’s bats prefer eating fruit. Both species hunt by sight and smell, whereas insect-eating bats hunt by echolocation. We have nearly 30 bats in our exhibit located in the Children’s Zoo. According to Lisa Cariello, a zookeeper in the Children’s Zoo, the bats receive a fruit mix, kale, and grapes in their diets. Lisa often provides enrichment activities for our bats to take part in, such as putting their food in different types of feeders, playing music, lighting adjustments, and adding “browse” for them to hide in.

Suzanne Jurek, a senior naturalist in the Children’s Zoo, was able to debunk some common misconceptions about bats. One being that light hurts their eyes. Bats are primarily nocturnal creatures; the light is completely harmless to them. They have evolved to be active at night primarily to evade predators. Since these animals are so small, during the daytime they find nooks and crannies to hide in to keep from being seen. Another popular misconception is that all bats have rabies. While bats are a vector for rabies, they must contract the disease; they aren’t born with it. Less than 1% of all wild bats have rabies. The important thing to remember is to not touch a bat whether it looks healthy or sick. Bats are also often known for the popular folktale of turning into vampires and drinking your blood. This is false! There are three species of vampire bats, but they aren’t indigenous to Texas and they do not drink human blood, only the blood of animals. Bats do not attack, and they will not bite unless you provoke them in some way.

These misunderstood creatures are extremely beneficial for our environment aiding in pollination and seed dispersal. Bats are extremely messy eaters, so their fur is a good receptable for transporting pollen to different plants while they fly. Seed dispersal is also very important to our ecosystem. Fruit-eating bats will eat the seeds of different fruits and dispose of the seed while traveling throughout the night allowing the plant to spread seeds.

The Houston Zoo helps protect bats in the wild by providing pollinator stations throughout the Zoo. These stations help bats and other pollinators, with pollination and seed dispersal. While you may not see any bats feeding at these stations during the daytime, know they are working hard at night to do their part in saving the environment!

The Zoo also participates in a bat monitoring program to save bats in the wild. DeAndra Ramsey, a coordinator for school programs, oversees the Bat Acoustic Research (BAR) project. This monitoring project requires acoustic monitors to be put up around the Zoo to listen for different bat species. The devices record calls throughout the night made by bats. Then, software analyzes the calls received to determine which species were in the area at the time. The Houston Zoo follows the protocol provided by the Lincoln Park Zoo, which suggests leaving the monitors up for four consecutive nights, retrieving the data, and recording another four nights. This project occurs once a quarter and provides researchers with 16 consecutive nights worth of data per quarter. The objective of the project is to compile the data the Zoo records and combine it with data that’s collected at other institutions. This will give researchers a better idea of what’s happening with urban bats around the U.S.

You can be an advocate for bats, too! Help celebrate Bat Appreciation Month by planting your own pollinator-friendly garden at home.

Plus, every time you visit the Houston Zoo, you help save animals, like bats, in the wild.