We’re highlighting a new blog series with our night team called Night at the Zoo! Check out the first blog in our series below. 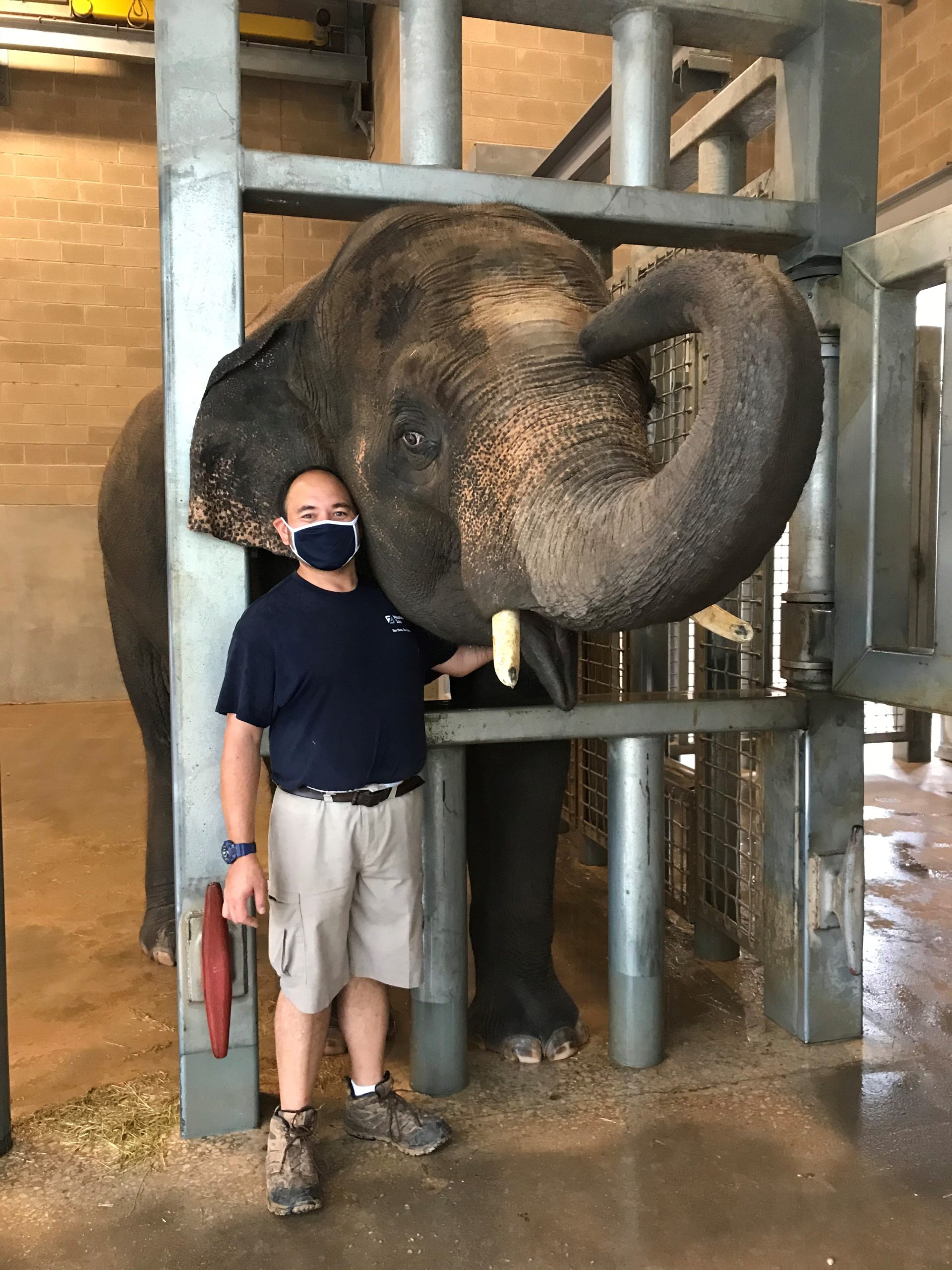 It’s the end of the day at the Houston Zoo. The guests are making their way out of the main exit, talking about their favorite animal from their visit and maybe about what’s for dinner. The Zoo staff are finishing their daily work and are getting ready to go home to their loved ones for the evening. The animals are seeing their daily keepers for the last time for the day and are eating their dinners or checking out the new enrichment items (e.g. toys, scents, bedding, etc.) that their keepers placed in their night houses while they were out for the day. Some of the animals may already be settling down for the night in their beds.

Because the animals, unlike the humans, are already home.

And because the animals are already home, I, Alec the night keeper (or the more fun and totally not official title: Alec – Keeper of the Night), am just starting my “day.”

And just who am I? Well, I’ve been working here at the Houston Zoo since July of 2018 when they created the night keeper position. But I may seem familiar to some of you because this is not my first time working at the Houston Zoo. In fact, I used to work at the Children’s Zoo and in the Education Department many years ago. During my time away from Houston, I was a keeper at a Zoo in Arizona where I worked with everything from invertebrates to rhinoceroses, alligators, fish, giraffes, ostriches, gibbons, anteaters, lions, tigers and bears (oh my!) plus a whole lot of other really neat animals.

Which is one of the reasons that I wanted to come back to the Houston Zoo to be the Night Keeper: as the night keeper I get to work a little bit with everything! (That and I don’t have to get up at 5:00 AM to commute through Houston traffic in order to get to work on time! But I digress…)

So why did the Zoo create my position?

Well, you see, the Houston Zoo knows that providing top-notch animal care means the care doesn’t stop when the guests go home. Just like human lives, the needs of our animal charges are great and varied and often change from day-to-day. And, just like in human lives, life doesn’t always adhere to a convenient schedule.

Sometimes an animal needs to receive medicine at specific times during the day, including late at night. Such was the case with two Mission golden-eyed tree frogs that needed some special eye drops to help prevent infections while they healed from cataract removal surgery. For these drops to work correctly, they needed to receive them three times a day with about 8 hours between each dose: a timing structure that doesn’t work well with a traditional 8-hour shift. But Houston Zoo has a Night Team! So, every evening I would visit the frogs in the vet clinic, after all the keepers had already left, and carefully place a single drop of medication in each of their affected eyes. 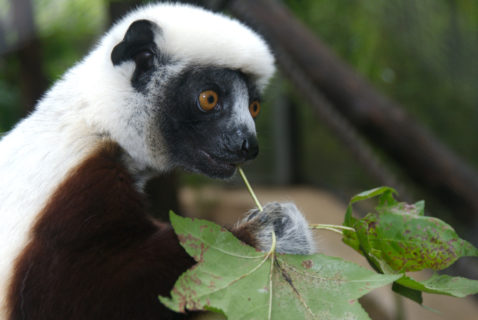 Just like humans after a surgery, animals recovering from anesthesia and medical procedures need to be closely monitored to make sure they are recovering well and aren’t picking at their stitches or otherwise getting themselves into trouble. As the night keeper I am the after-hours eyes and ears of our veterinarians and animal supervisors. When Xenobia, our Coquerel’s sifaka needed to have a tooth pulled because of an infection (remember to floss and brush your teeth, everyone!) I checked on her during the night to make sure that her bedroom was warm enough for her, that she was moving around well, and that she was going to the bathroom normally. I also got to witness her mate, Gaius, and her daughter, Athena, keep watch over her while she recovered from her procedure, just like a human family would with their recovering loved one. As it turns out, Xenobia did great after her surgery, but had I seen anything amiss, one phone call would have had vet staff back on grounds to address the issues. Just as in human medicine, a timely response can be the difference between life and death.

Speaking of life, earlier this year we welcomed a baby Schmidt’s red-tailed guenon named Peter Rabbit, and I had the honor of giving him some of his late-night bottles. Now, due to the measures taken by the Houston Zoo to keep all our keepers safe during the beginnings of the COVID-19 pandemic, I had been temporarily reassigned to daylight duty to help our elephant staff welcome their new bundle of joy Nelson while Peter Rabbit was a newborn.

By the time that I finally got to meet Peter Rabbit, he had grown accustomed to the same, small group of people giving him his bottle, and I had to prove to him that I was a trustworthy human! It took a lot of patience, and there were a lot of laughs—mainly from the Primates keepers who were quite amused at Peter’s extreme reactions to me (Look, it’s hard on one’s soul when a baby doesn’t like you!), but Peter finally realized that I was just there to give him food and that I’m not that bad a guy. A realization that kept his belly full at night and made my night at work a whole lot easier.

The Houston Zoo that I get to see at night might be the same Zoo you visit during the day, but it’s also a very different Zoo. I don’t have to walk through crowds of people, and instead of people talking I hear the native insects, frogs, and birds that also call the Houston Zoo their home. The list of experiences and stories that I could tell you about my time as the night keeper go on and on. The above is only a small sample.

So, the next time you find yourself at the Zoo around closing time, see if you can find me and ask for a new story. But if you don’t see me, know that as you make your way home, I’m making sure that the animals living in the Houston Zoo are still getting the best care possible. Because the humans of the Houston Zoo are not just working to save animals in the wild from 9-5. We’re doing it all night, too.