On World Snake Day, the Houston Zoo is celebrating snakes of all kinds and working to dispel the myths of this feared reptile. All summer long, teens at the Houston Zoo are spearheading a new campaign with the goal to change the way Houstonians perceive one of the most misunderstood animals on the planet. Often marked as aggressive, dangerous animals, snakes play a vital role in maintaining healthy ecosystems and benefit human life in more ways than most realize. This misunderstanding prompted a group of teens, the Snake-Saving Campaign Committee, to work to save these animals in the wild. Their purpose statement is as follows:

The Snake-Saving Campaign’s goal is to understand how communities perceive snakes and where these perceptions originate in order to foster a new interpretation and appreciation of snakes through research, education, and engaging experiences. 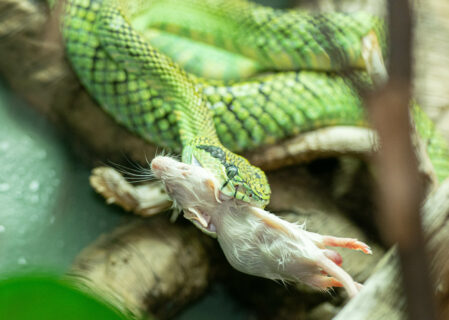 Though seen by most as a threat, snakes provide humans with a multitude of ecological services. For one, snakes are predators and play a crucial role in maintaining balance in local ecosystems. Notably, snakes are also a big means of natural pest control, feeding on rodents and other small animals seen as nuisances to humans. Additionally, as mentioned in Snake Venoms in Cancer Therapy: Past, Present and Future, snake venom has shown to hold properties with cancer-fighting potential, being used in a series of research trials in cancer centers across the world (Li, Huang, Lin 2018). Beyond the role snakes play in keeping our ecosystems healthy and furthering medical research, they are extremely unique animals worthy of appreciation and protection.

The Houston Zoo isn’t just saving snakes in its local communities but globally as well. The Zoo is committed to saving the wild counterparts of the Zoo’s king cobra. Murthy Kantimahanti, founder and director of the Eastern Ghats Wildlife Society, one of the Zoo’s many wildlife conservation partners, works to protect snakes in India’s Eastern Ghats, rescuing and relocating 15 King cobras and over 400 other local snakes from potential conflict with villagers in the year 2020 alone. With support and training from the Houston Zoo, Murthy works with his team in India to dispel the fear and change the stigmas surrounding snakes in his local community and played a large role in empowering and inspiring the Houston Zoo’s Zoo Crew to create their own campaign to save snakes here in Houston.

“The Zoo teen’s program for protecting the native snakes of Texas is a good initiative as it has a unique approach to understand and address ‘ophidiophobia,’ the fear of snakes, among the target audience which is also one of the root causes for human-snake conflict,” said Kantimahanti.

The Snake-Saving Campaign Committee is currently collecting data to understand how Zoo guests perceive snakes. They are doing this through surveys, interactive quizzes and activities, and guest observations in which Zoo Crew members record observational data of guest interactions with snake exhibits. From here, the Committee intends to begin analyzing their collected data in hopes of further understanding Houstonians’ outlook on snakes and how, as interpreters and conservationists, they can foster an appreciation of snakes and educate the community on how to coexist with snakes.

Recycle Your Holiday Lights at the Zoo to Save Wildlife