Over in the Houston toad facility we certainly do get excited about Texas-sized things. After counting our egg strands from the 2016 breeding season, we found we had something big to celebrate. During week 6 of breeding, we had a pair of toads produce over 15,000 eggs. Collected from previous years, our data shows us that on average our females lay around 7,000 eggs per strand. In 2016 we had 12 females produce strands that contained more than 10,000 eggs. There are many variables that impact egg production, though – even the weather.

While 15,000 eggs certainly sounds like a lot, it’s important to consider why toads produce that many. The Houston toad is an r-strategist species when it comes to reproduction. What this means, in general, is that they produce a large number of offspring, but don’t put very much effort into caring for them. The offspring of r-strategist species are often small, and quick to mature, with a low percentage chance of survival, and this is definitely true of the Houston toad. To contrast, a species that uses a K reproductive strategy will generally have offspring that is larger in size, slow to mature, and their parents will put in a lot of care to help them survive (think elephants). 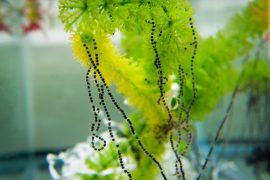 As the 2017 breeding season begins, our hopes are high that we’ll see many large egg strands. Ideally, we hope we can combine the toads’ r-strategy with the extra care of our keepers and partners who help release the strands in the wild, and let the toads see some of the benefit of K-strategy leading toward higher offspring survival numbers than they would see alone in the wild.