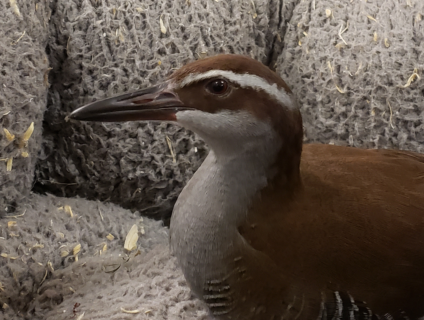 Earlier today, you met Hurao, our Guam Rail. This is a flightless bird, which can run very quickly and historically was only found in the wild on the island of Guam. The Guam Rail can now be found on the islands of Rota and Cocos, because populations were established there through breeding programs and releases. These islands are part of the Mariana Islands – a place where Houston Zoo bird team members have been saving birds for the last several years.

The Guam Rail is only the second bird in history to come back from being declared extinct in the wild – the population suffered a huge decline due to the accidental introduction of the brown tree snake. These snakes became invasive predators, causing local bird species to decline rapidly. To save the species, the birds were brought in captivity, bred, and later reintroduced to neighboring islands that did not have invasive brown tree snakes.

Similarly, to the Guam Rail, birds like the Tinian Monarch, Rufous Fantail, and Bridled White-Eye have declined due to the brown tree snake. Houston Zoo staff have spent the last several years working alongside Pacific Bird Conservation on the MAC Plan (Mariana Avifauna Conservation).

The goal of this project is to translocate birds at risk of predation from the brown tree snake to safe, neighboring islands, where the snakes are not present.

Our staff visit remote islands in the Mariana Islands chain, using their husbandry skills from the Zoo to catch, care for, and later release specific bird species to help boost the population. Follow-up studies to assess how the translocated populations have done show significant progress, with bird populations thriving on islands without the brown tree snake.

During our closure, please consider supporting our Emergency Zoo Fund to ensure this critical work to care for the animals at the Zoo, while protecting their counterparts in the wild, continues.