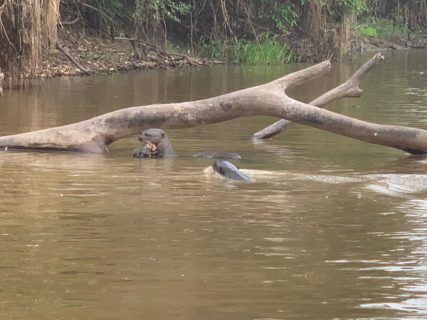 The Houston Zoo traveled to Brazil with KPRC Channel 2 documenting the work the Zoo is doing to save animals in the Pantanal. We are opening a new exhibit at the Zoo next year highlighting the magnificent wildlife of the Pantanal, which will also feature the Zoo’s work to protect the wild counterparts of the animals that will be in the exhibit. The team spent two days on the Rio Cuiabá in Brazil following jaguars and another “giant” we are working to protect in the wild: giant otters.

Lean, mean, fish-eating machines… Ok maybe not so mean with their cute little faces and adorable webbed feet they use to position their catch so that they can chew it’s head off… Ok maybe a little mean.

These loud and social otters rule the waterways and at 5-6 feet long and weighing up to 70 pounds, they are large enough to fend off caiman and jaguars. A family of otters can be as small as four individuals or on average 8-10 in some areas. One of the otter’s favorite foods in the river is the armored catfish – which many aquarium hobbyists might know as the Plecostamus – and is tough enough to fend off most predators but easy prey for giant otters.

These otters are not only social but also very vocal and communicate with squeaks, whistles, and other noises that sound a bit like Chewbacca. They are critically important to the health of the river and add tremendous value to ecotourism in the region. As fun as it is to watch jaguars prowling the banks, it is just as entertaining to watch these otters float around holding fish in their webbed front feet and having a feast. 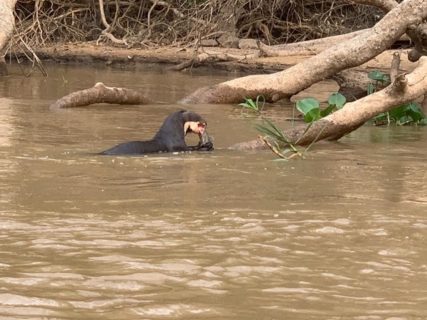 The Zoo is working with Brazilian conservation partners to train local ecotourism guides to view the otters without intrusion. Guides learn about appropriate distances that won’t impact the otters around the breeding season and when they’re having pups. Ecotourism can be managed properly and is very important for this species’ protection. When people come to see giant otters and other wildlife, they’re strengthening Brazil’s economy, and thus, strengthening the country’s ability to protect wildlife and wild spaces.

We hope you enjoyed journeying with the Houston Zoo to Brazil’s Pantanal to see how your admission and the Zoo is saving the wild counterparts of the Zoo’s Brazilian animals like the giant anteaters. We also loved sharing a sneak peek of the filming of the 2020 Houston Zoo Saving Wildlife in the Pantanal KPRC 2 documentary and giving you a glimpse of what wildlife, like jaguars, you will get to encounter in the Zoo’s newest Pantanal wildlife exhibit, set to open in 2020.