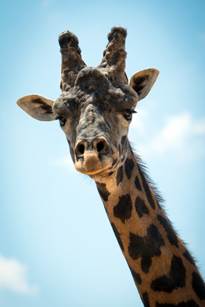 Today, Monday, Feb. 22, our eight-year-old male Masai giraffe was humanely euthanized after he experienced a significant fall. Our keepers and veterinary team worked tirelessly to help the 1.5 ton giraffe to his feet, but when it was evident that he could not stand, the decision was made to euthanize Mtembei.

Mtembei was the father of our four youngest calves and was well-recognized by his dark coloration at giraffe feedings.

“We are all mourning the sudden loss of this magnificent animal,” said Sharon Joseph, vice president of animal operations. “When a giraffe is unable to stand, it is imperative to evaluate the animal and make every effort to get them back on his feet as quickly as possible. Our giraffe team and veterinary staff immediately began efforts to help Mtembei regain his footing and gave him pain medication, fluids, and supportive care to optimize his chances. However, after several hours it became clear that he would not be able to recover from the injury.”